Pangasius, scientifically known as Pangasius hypopthalmus is a large freshwater catfish indigenous to the countries within the Mekong Delta. It is regarded as the third most important freshwater aquaculture species because of its fast growth, hardiness and versatile feeding habit.

Pangasius is also known as cream dory, tra, swai or striped catfish in the fish food market or Siamese shark or sutchi in the aquarium hobby. It was introduced in the Philippines both by the private sector and the Bureau of Fisheries and Aquatic Resources as an alternative species for freshwater aquaculture.

Pangasius is an air-breathing fish that can grow normally even at low dissolved oxygen levels of 0.1 mg/L, making it adaptive and tolerant in poor water quality. Under intensive aquaculture conditions the species will reach harvest size of one kilogram in approximately six to seven months and requires low protein feeds. It is the fast-growing fish in the aquaculture sector with 35 to 45 percent meat recovery.

With a wide mouth and curvature (not sharp) located in quite low position give the fish the ability to feed on a variety of food items (omnivorous). Two (2) pairs of barbells are situated in the mouth – one pair on the upper jaw (maxillary barbell) and another pair on the lower jaw (mandibulary barbell); the first pair is longer than the latter.

Under normal conditions Pangasius becomes sexually mature during the 2nd year. In some ponds where conditions are not favorable to this growth the period is considerably longer.

A gravid female have a bulging belly which is swollen and soft while the urogenital-oval shape is reddish in color which is much bigger than the male. The release of yellow eggs is eminent when abdomen is pressed or when holds at the caudal and fold its body above water. While the male have a slender body and belly is not swollen. The urogenital-oval shape is narrow and smaller than the female and when the belly is pressed, it releases white milt.

Hatching period is from 27 to 32 hours after spawning at temperature of 28 to 31°C. The fertilized eggs are sticky and spherical in shape. It is 1.186 mm in diameter, contains large quantity of yolk and has a yellow greenish color. The newly hatched fry which is approximately three mm in length is colorless and transparent with no signs of movement from one to two hours then after, it swims in vertical direction until three days old.

After absorption of the yolk sac, the freshwater hammerhead shark fry differs from other fish that it will begin to eat food and has cannibalism behavior. The three days old fry can swim horizontally and its organ will completely develop as the fish mature and reaches its 14 days.

Pangasius has the ability to grow from 20 gram fingerlings to one kilo in six months with a feed conversion ratio (FCR) of 1.5 (you produce one kilo of fish meat with 1.5 kilos of feed).

The fish has a survival rate of almost 100 percent, and production cost less than Php40 per kilo. It can be stocked intensively at the rate of 300,000 fish per hectare without requiring mechanical aeration. When filleted it becomes a “generic white fish” that is now used by restaurants as a replacement for the more pricey marine fish.

Being omnivorous, the Pangasius generally eat all kinds of live, fresh, and flake foods. To keep a good balance, a high quality flake food or pellet may be supplied every day. As the fish get older, they lose their teeth and become more and more vegetarian. The use of insecticides, antibiotics, waste water and leftover food discharge to pond and other illegal chemicals is not encouraged for this will prevent growth of pangasius.

Pangasius can be cultured in fishponds, concrete fish tanks, fish cages and fish pens with the acceptable water conditions:

The pond should be roughly 1,600 square meters or at least 400 square meters.  The growth of the Pangasius is fast, requiring depth of approximately 1.5 to two meters. The pond should be situated near a water source in order to fetch in and extract water. Pond preparation is the same as general preparation for other fish ponds. Water to be used in the pond must have a fitting pH value and a proper oxygen concentration. Fingerlings to be used should be selected based on the healthiness of the fish – without wounds, no abnormalities and no disease and approximately all same size to keep them away from fighting for food. Pellet feeds are advisable for feeding to ensure faster growth.

Stocking rate is about 10 to 15 fish per square-meter. Given the proper feeding and management, it can grow to one to 1.5 kilo in five to six months time. Catching the Pangasius can be conducted using suitable net.

Location of floating cages should be near flowing water like rivers, dams and lakes. Size of cages should be 10 × 10 meters by five meter depth. Stocking rate is about 30 to 50 fish per cubic meter. Food for feeding are pellets, trash fish including water plants and small animals such as insects and worms. Harvest is much easier in cages compared to earthen pond.

Similar to other fishes, the Pangasius can get diseases such Ichthoyophthirius species parasite, the trichodina species parasite, inflammation of stomach disease, diseases from the dactylogyrus species parasite or flat-body parasite and the rice-shape wart disease. Thus, it is important to have traceability of the production (from processing plant to farm hatchery and feed mill) and an appropriate culturing environment (site selection and production practices, as well as sanitation).

Using pellet feeds can somehow prevent diseases in Pangasius since food is controlled, however, prevention is still the best cure through sustainable culturing, good management and efficient water supply.

After six months, the fish is harvested by dragging in the nets and transporting the catch alive in well-boats to the factories. The fish can be harvested all year round. 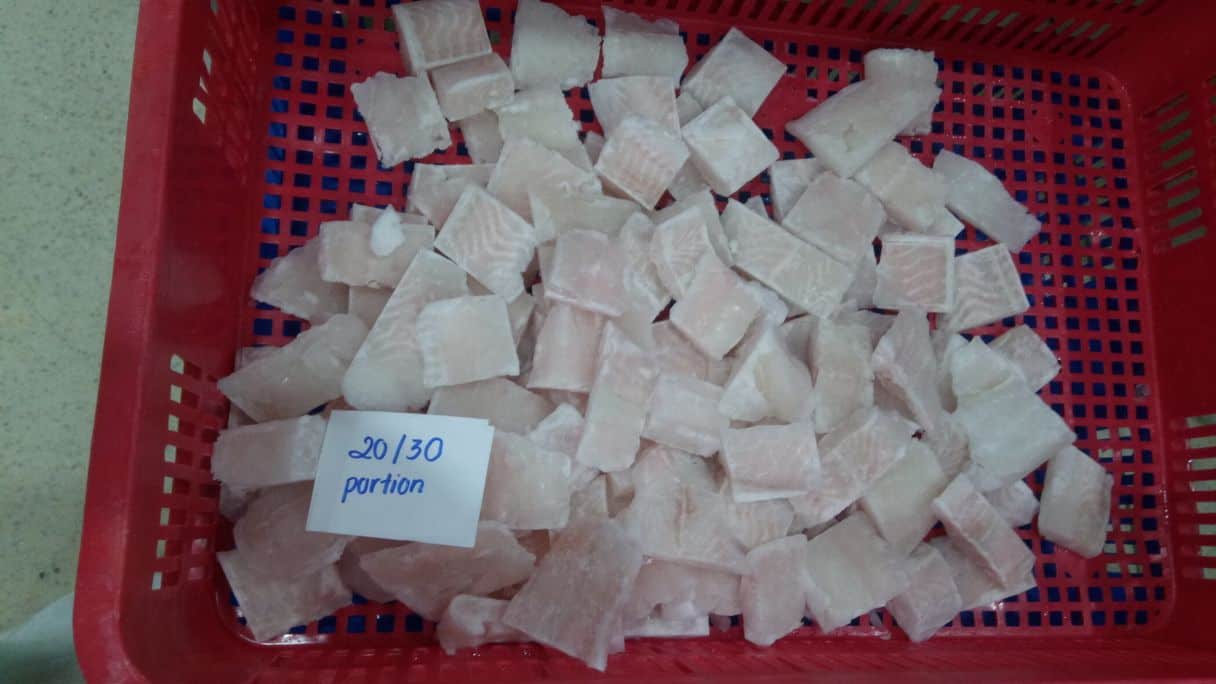 In the initial 4 months of 2022, Vietnam's shrimp commodities to Australia arrived at US$95 million, up 74% over a...
Read More 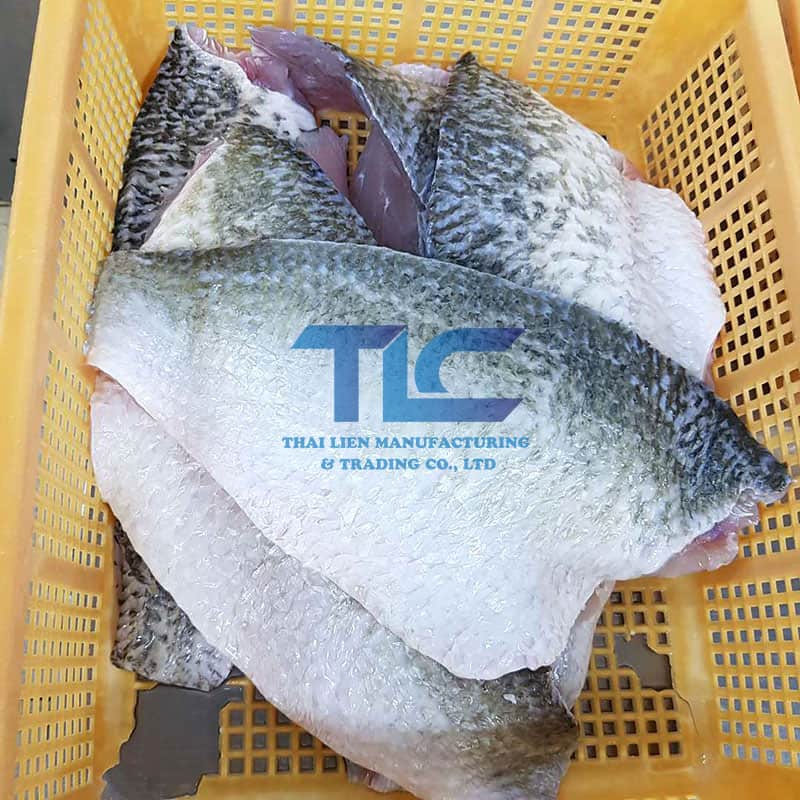 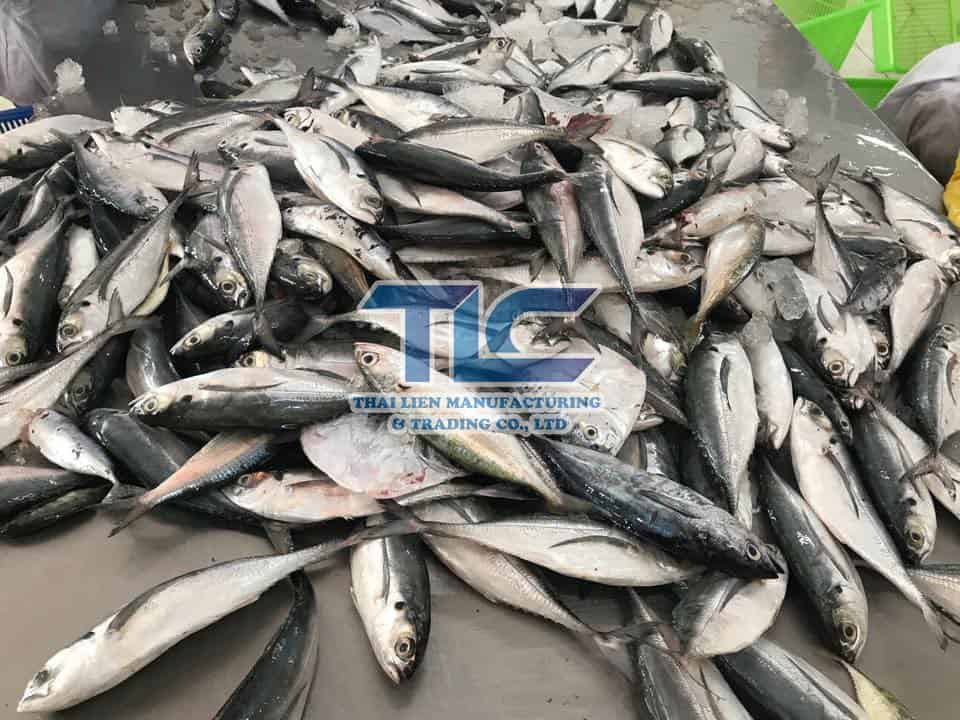 Why seafood from Vietnam?

GENERAL INFORMATION Vietnam, with a coastline of over 3,260 kilometers (km) and more than 3,000 islands and islets scattered offshore,...
Read More 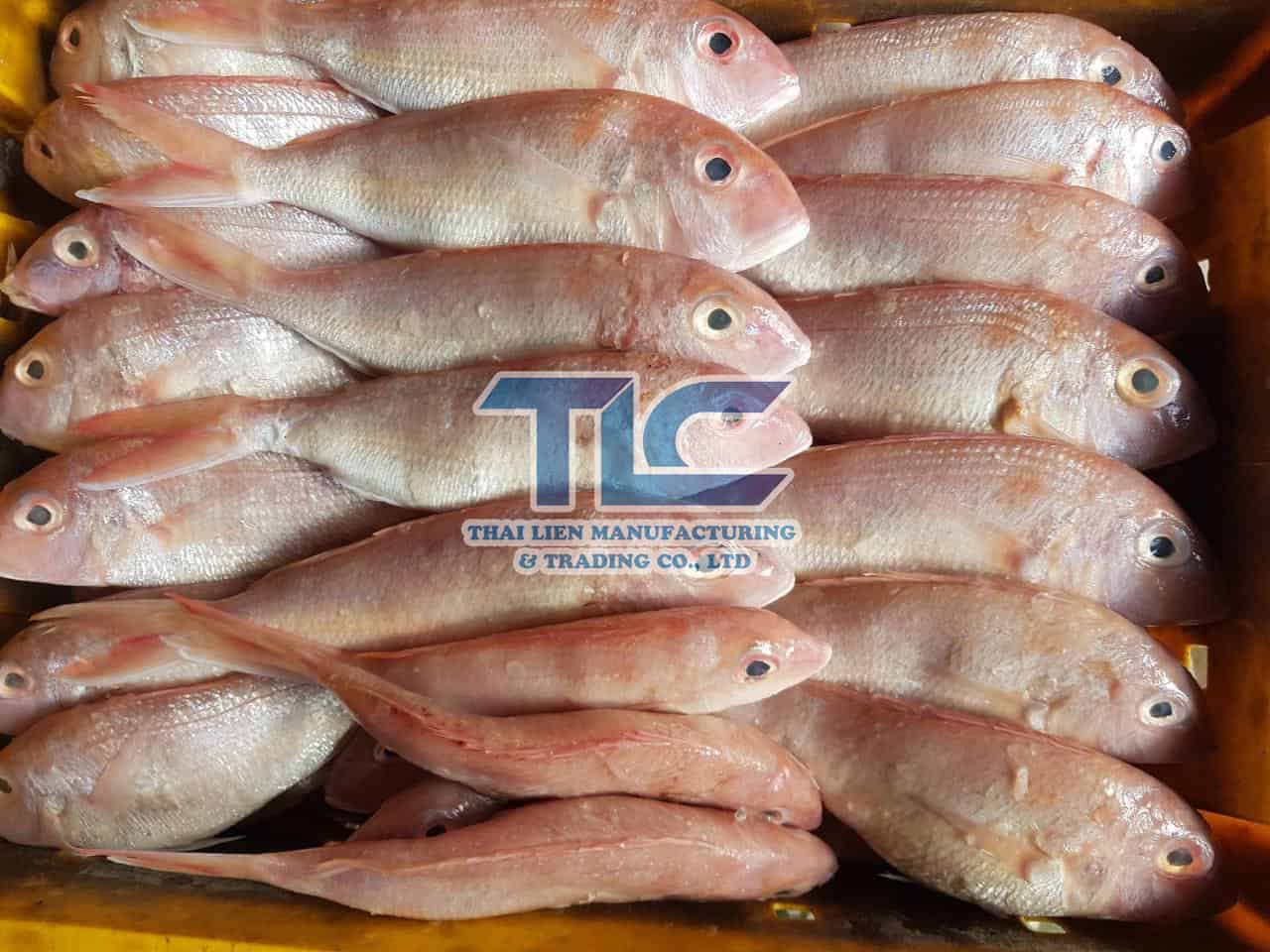 Pangasius, scientifically known as Pangasius hypopthalmus is a large freshwater catfish indigenous to the countries within the Mekong Delta. It...
Read More 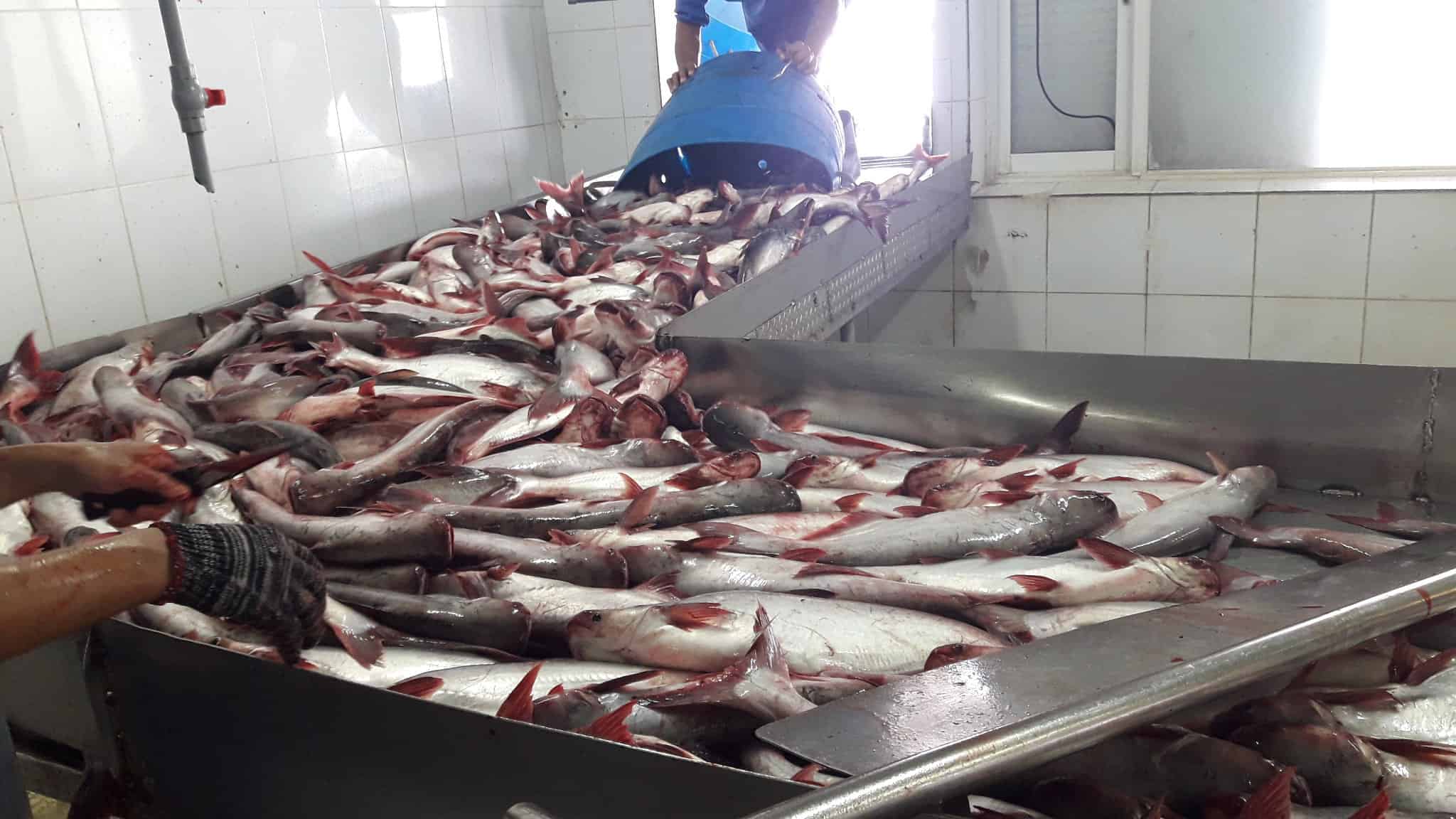 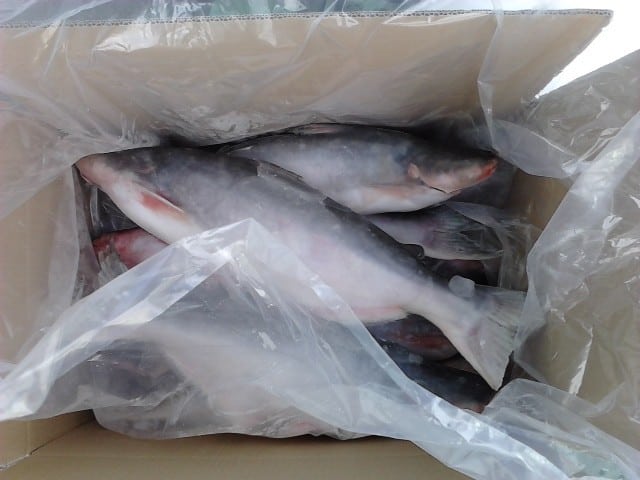 In 2022, the pollock fishing quota is forecasted to decrease by hundreds of thousands of tons. The global food price...
Read More 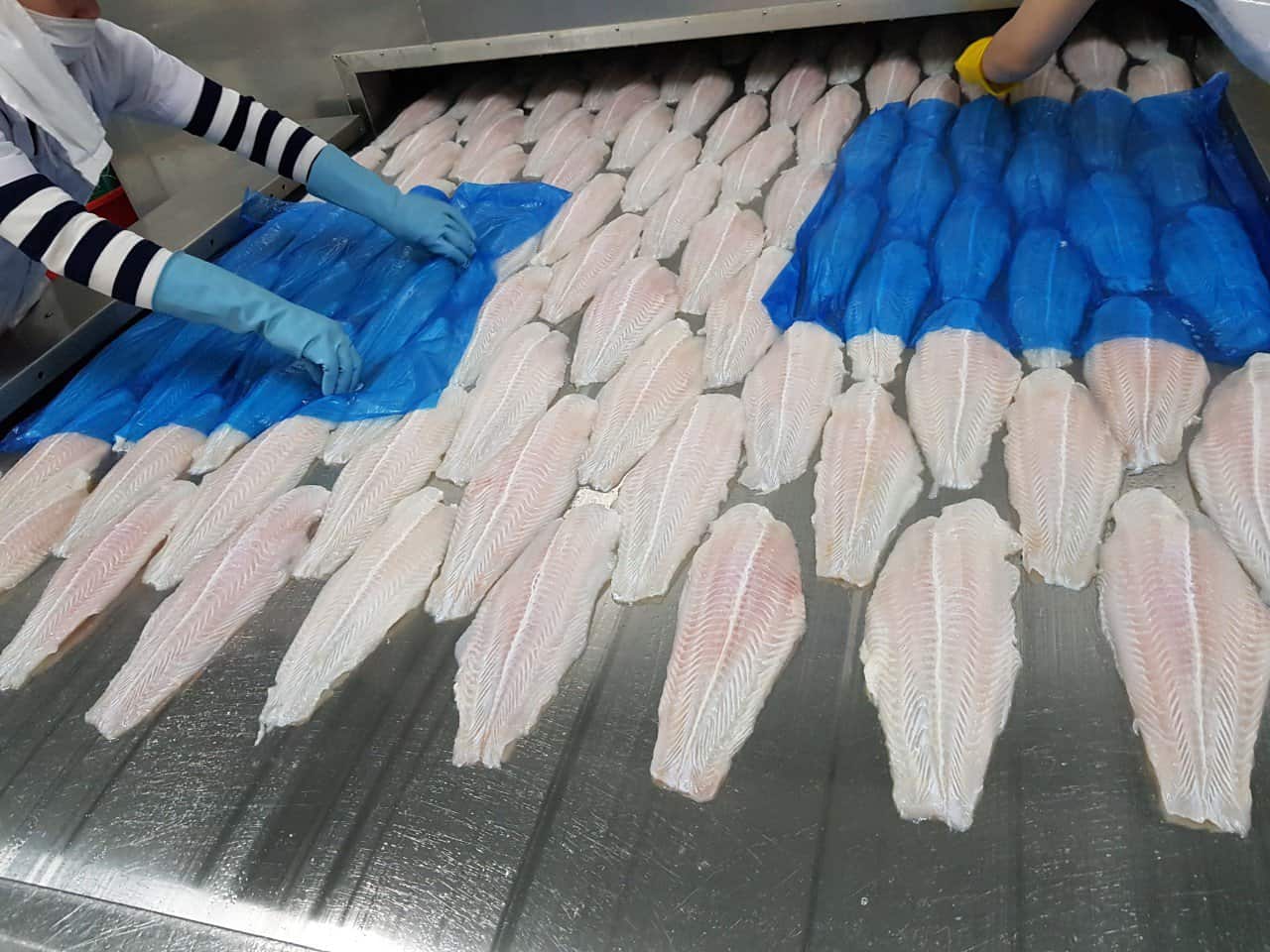